Growing up, I thought Thanksgiving was supposed to look like the Norman Rockwell painting. Sadly, very few families ever reached such great heights. 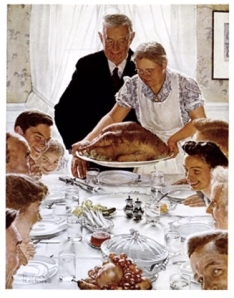 When my mom was first married, she had never cooked a turkey before since her family didn’t celebrate Thanksgiving. She cooked the turkey the only way she new how… she boiled it. My father had just come out of the Air Force and had been living on mess hall food, so he didn’t know the difference.

I’ve had my share of unusual Thanksgivings. As a kid, I remember trekking to my grandparents house for the big event, which was anything but traditional. My grandfather always had Big Time wrestling blaring on the TV, my uncle Peter brought his entourage of colorful boyfriends and the turkey was served with rice and beans.

As a young adult, I had gone to culinary art school so I was a wanna-be foodie. I was learning about food from Marleen Deane, whom I worked for at First Street Foods and Martha Stewart was big in the culinary world. I learned how to properly roast a turkey from the Silver Palette Cook Book. Inspired, I attempted to introduce dishes that did not have marshmallow in it. I was so proud of my butternut squash soup, which was met with some resistance from my family.

When I worked in Mexico leading surf trips, I spent three consecutive Thanksgivings in Sayulita, which was just a small fishing village at the time. Because turkeys were not available there, our crew brought a turkey on the plane from California. We cooked a huge dinner at our friends restaurant for all the local surf kids. They called it El Fiesta del Pabo.

As time has gone by, I’ve become less interested that traditional Rockwell holiday. I’ve noticed I am not the only one. A friend is hosting Fauxgiving on Wednesday, since that’s the day she has her kids. Others are hosting unconventional gatherings for the families they’ve created.

As for me, my own family structure has changed in the past year so this year I am hosting a small dinner at my folk’s house. My sister and her family are in Japan so it’s just five of us.

I am still a foodie, so I firmly believe in a fresh turkey versus frozen… but have no ambition to shop for one. Luckily, a few days ago my mom’s Schwaan’s dealer delivered the spiral ham she had reserved. I am actually relieved that I don’t have to get up at 5am to roast a turkey… and then deal with disposing of the carcass later.

It took me a long time to learn that it’s okay for traditions to be untraditional and as unique as families. This year we start a new tradition, the Thanksgiving ham… and what the heck, I’ll go ahead and make a marshmallow salad. Some things just shouldn’t be messed with.

Here’s wishing you a lovely holiday.

One Reply to “New Thanksgiving Traditions”