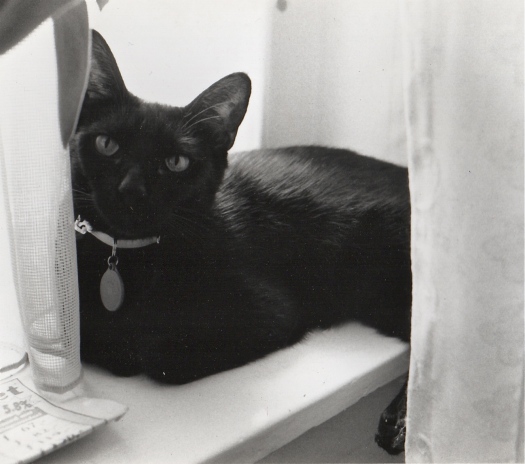 In 1998, I adopted a feral cat in Berkeley (where I worked). She was four-month-old beautiful Siamese patterned kitten. I  brought Minou home, hoping we would bond… but it never happened. Her feral instincts were firm. She was not a people cat. I couldn’t even pet her.

It was recommended that I get another cat, for my cat. Enter JB Davis and Lisa Reynolds, long-time friends and animal rescuers. They had a 4-month old black kitten that needed a home. This was  no ordinary cat.

Mooch’s name, I believed was Scaramooch (as in Queen’s “Scaramooch,  Scaramooch can you do the fandago…”  ), but I’ve recently learned that it was Caramouche, inspired by a children’s book.

Mooch would drape himself around JB’s neck. Raised with the pack of dogs at JB’s house, Mooch would run to the front door when anyone knocked… just like a dog. He was a dog in a cat suit.

When I brought Mooch home, I didn’t know what to expect. I let him loose in  my apartment, and within 60 seconds, Minou came running out from under my bed… with Mooch chasing her. A few minutes later, Mooch came running out with Minou chasing him. It was the beginning of a beautiful friendship. With Mooch’s help, Minou and I finally bonded.

Mooch was popular in the Benicia waterfront neighborhood I lived in. He’d regularly bring me presents of fresh fish, birds and lizards. It was common for me to come home, and find  Mooch hanging out at my neighbors apartment…. a crew   of Maritime students. Mooch could hold his own in any crowd.

Fast forward three years… I am now married and pregnant. Having returned from living in Amsterdam for a year (all of us), Mooch would lie on my warm belly…. hit arms stretched to full capacity. He was claiming the baby as his own. When we brought baby Dexter home, the first time, Dexter cried and Mooch came running to see what was wrong. Dexter was clearly his kid.

From the beginning of their brotherhood, Mooch began training Dexter to be a cat. Dex would crawl on hands and knees, rub his face on Mooch’s and meow. The bond was strong and true. This is how we both learned the magic of speaking Meow.

Dexter had  never known a world without Mooch. He was the hero in all his stories and drawings. He was his best friend. With a strong resilience, Mooch moved dozens of times with us. The most recent move was a week ago, when Mooch moved back into my house in Vallejo.

A week before Christmas, we adopted a new kitten named Boo. He is black and full of personality, just like Mooch. The two bonded immediately, Mooch training him, just like Dexter on how to be a cat.

Over the past year or so, Mooch had slowed down. It was obvious that he had arthritis and it was getting painful to get around. Yesterday, Mooch awoke in pain… obvious by his owe owe owe meows. It seems he had a stroke, and was now having seizures every few minutes. We knew this day would come. We could not stand to see him in pain so we took him to our vet and had him euthanized.

This was very difficult and painful for Dexter, but he held his paw and stroked his head as the needle went in. I am very proud of both of them. Today we laid Mooch to rest in the backyard, between a baby cherry tree and the Buddah succulent garden.

This evening, as the sun set, we toasted Mooch in the backyard. Dex and I are waiting for signs… to see if Mooch will return as another form, based on the lesson we learned from Sera’s passing last year. The anniversary of Sera’s passing happens to be today. Although the two met only once, I believe there is a connection somehow.

Mooch was 16 years old. He was smart, super friendly and had a full life. He will always live in our hearts. I know that Dexter will  never forget the lessons of compassion, comfort and unconditional love, that he learned from Mooch. Having heard the concept of moving on from Sera’s passing, Dexter told me… “I think Mooch died so we could make room for Boo.”

One Reply to “Saying Goodbye to Mooch”